When Peter Thomas was named the 4th Head Coach in Rye High School’s storied hockey history, he wanted to honor all Garnet traditions and create new ones that will have a lasting impact on his players and the hockey program. So coach went shopping! Now, after every Garnets win, the player of the game is awarded the “Rye Hockey Bucket”. The player not only wears the bucket that night, but to school the next day!

3/1 Section 1 Division II Championship vs John Jay the bucket was awarded to Junior Forward #14, Liam Hurley who contributed defensively killing penalties and offensively by recording a key assist to help the Garnets to a 5-1 victory and Rye's fist Section Championship since 2010. 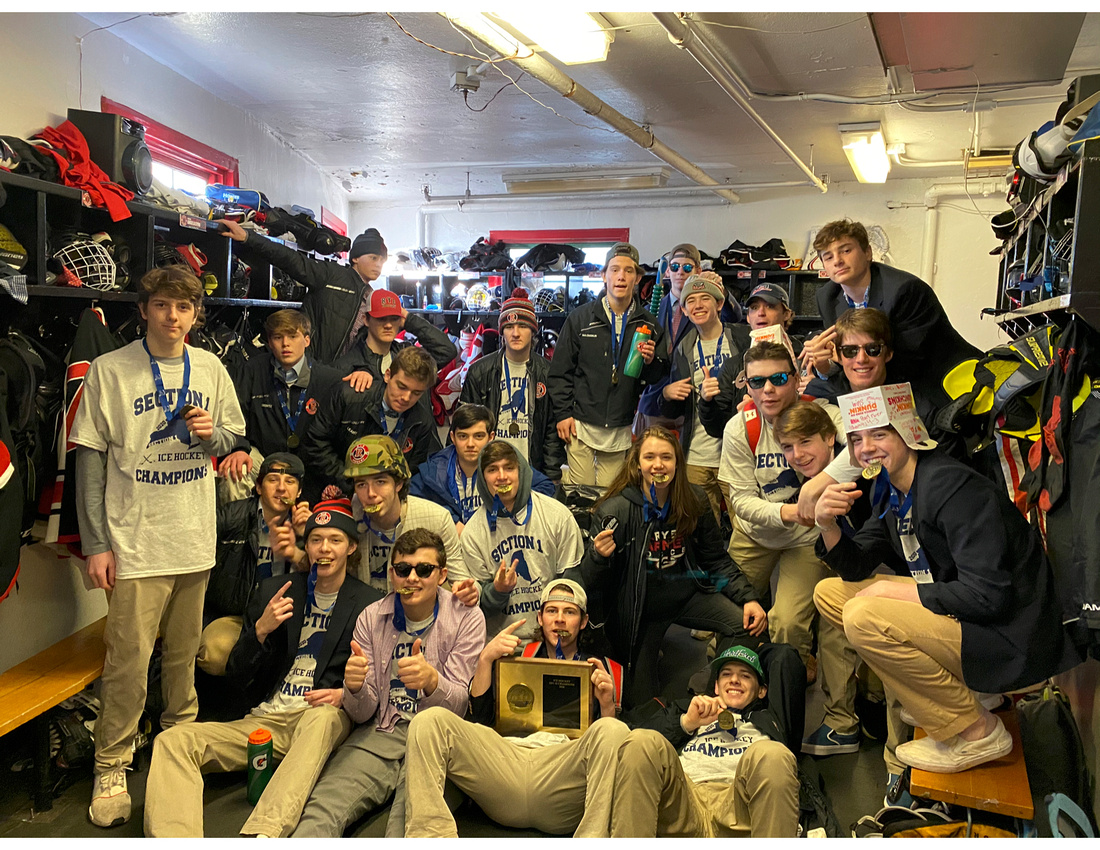 2/27 Section 1 Division II Semifinal vs Pelham the bucket was awarded to Sophomore Goaltender #30, Anabelle Thomas who stopped 25 of the 26 shots to lead us into the Section Championship game with a 3-1 win. 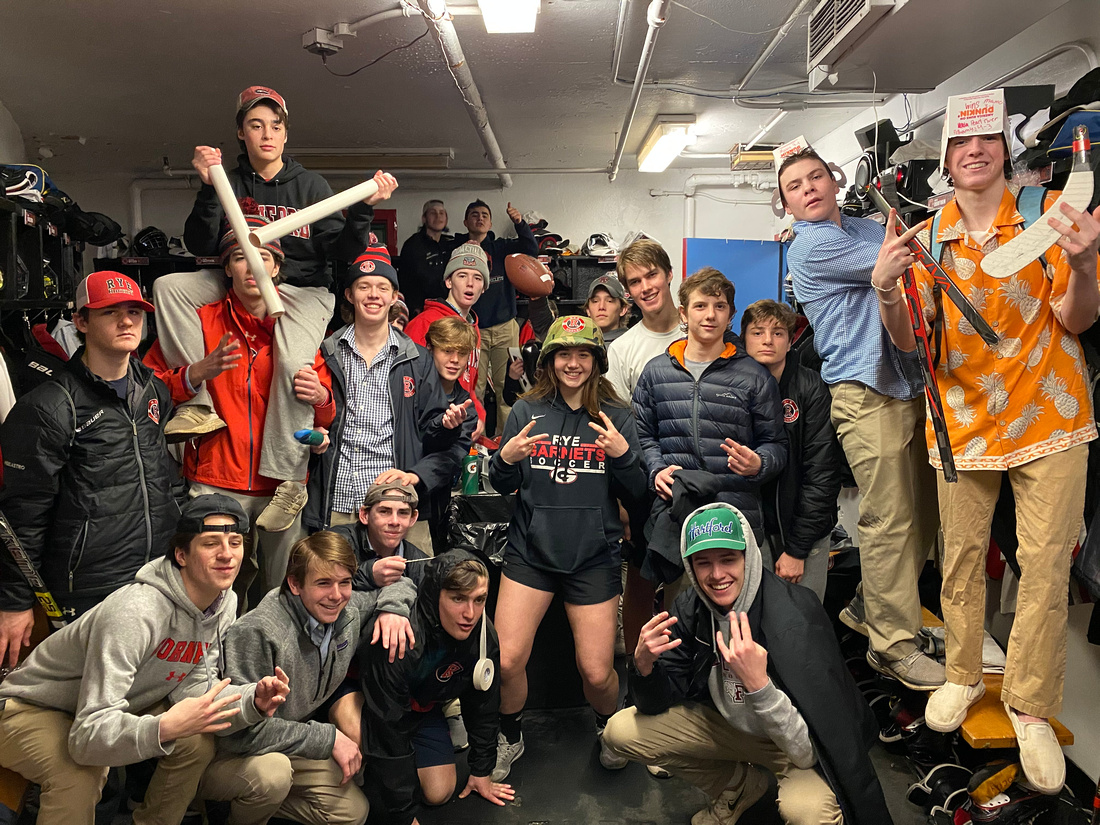 2/13 vs White Plains the bucket was awarded to Senior Forward #9, Declan Lavelle for recording a hat trick (including a power play, and short handed goal) in the teams 6-3 win. 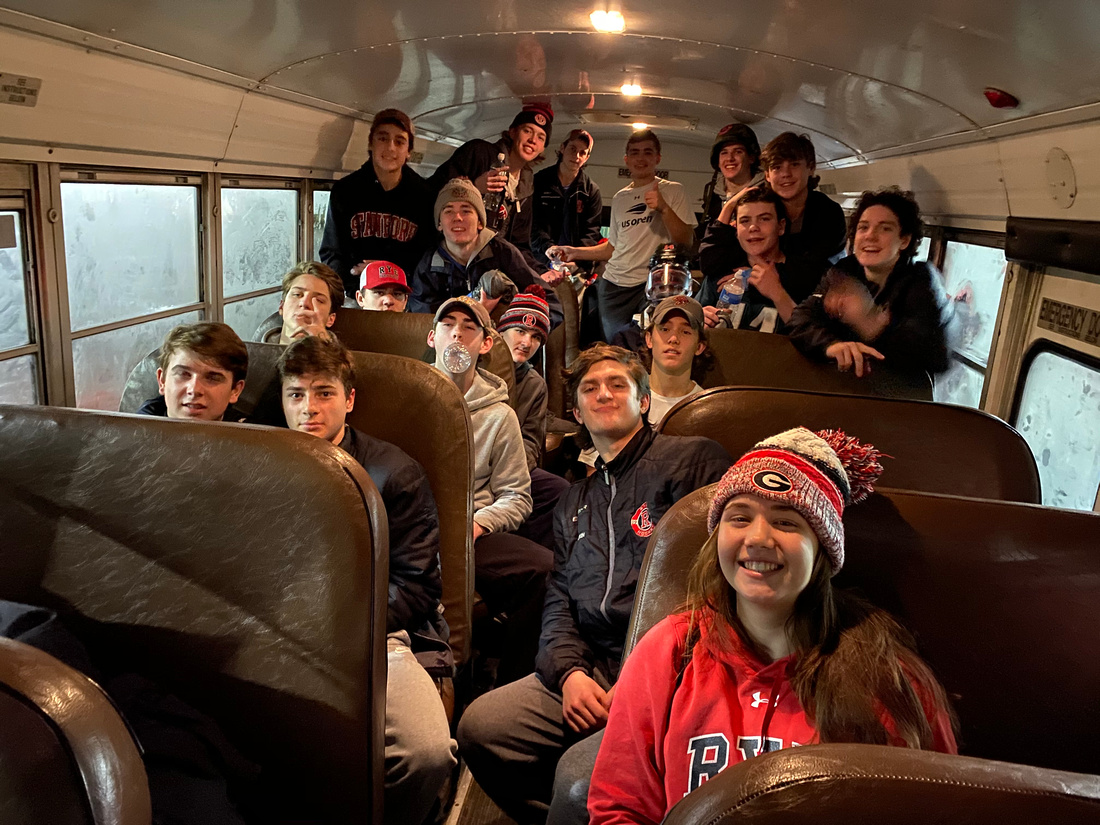 2/5 vs North Rockland the bucket was awarded to Freshman Forward #23, Sam Askin for his relentless hustle and for scoring the game winning goal in the team's 5-2 win. 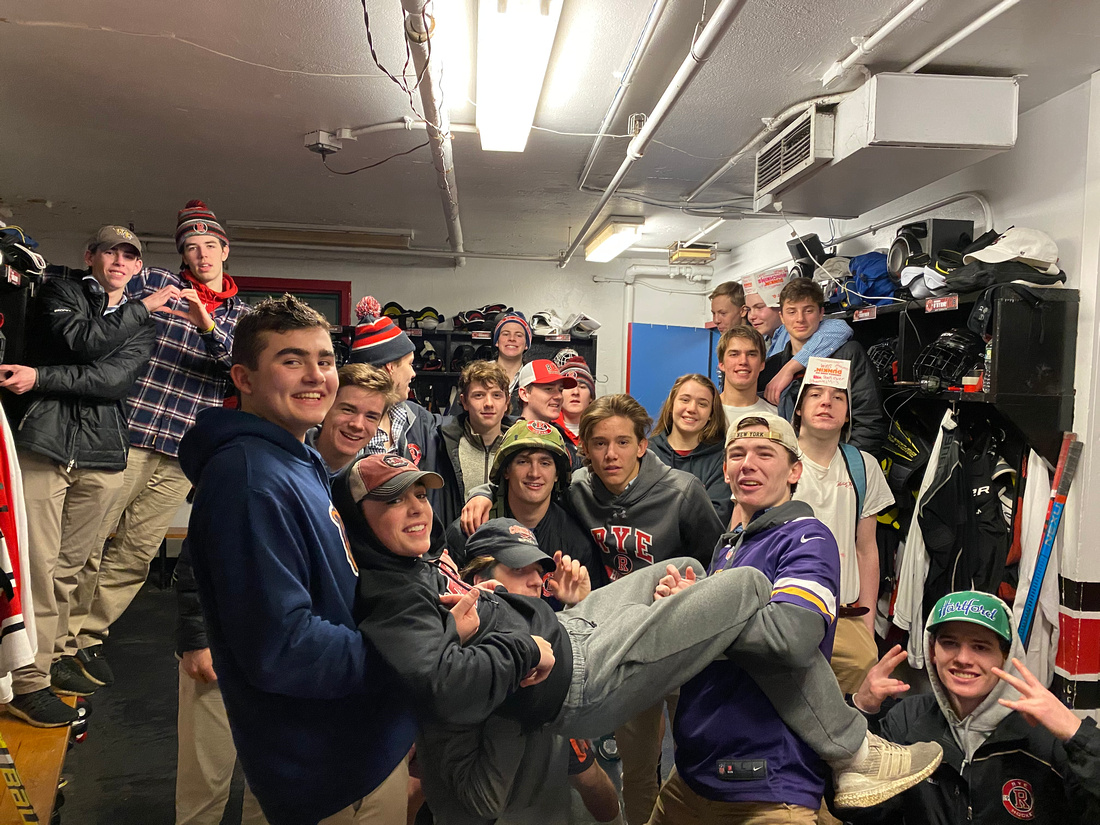 1/31 vs Saranac Central the bucket was awarded to Junior Goaltender #29, Billy Deertz for recording his first varsity saves in the third period of the team's 6-3 win. 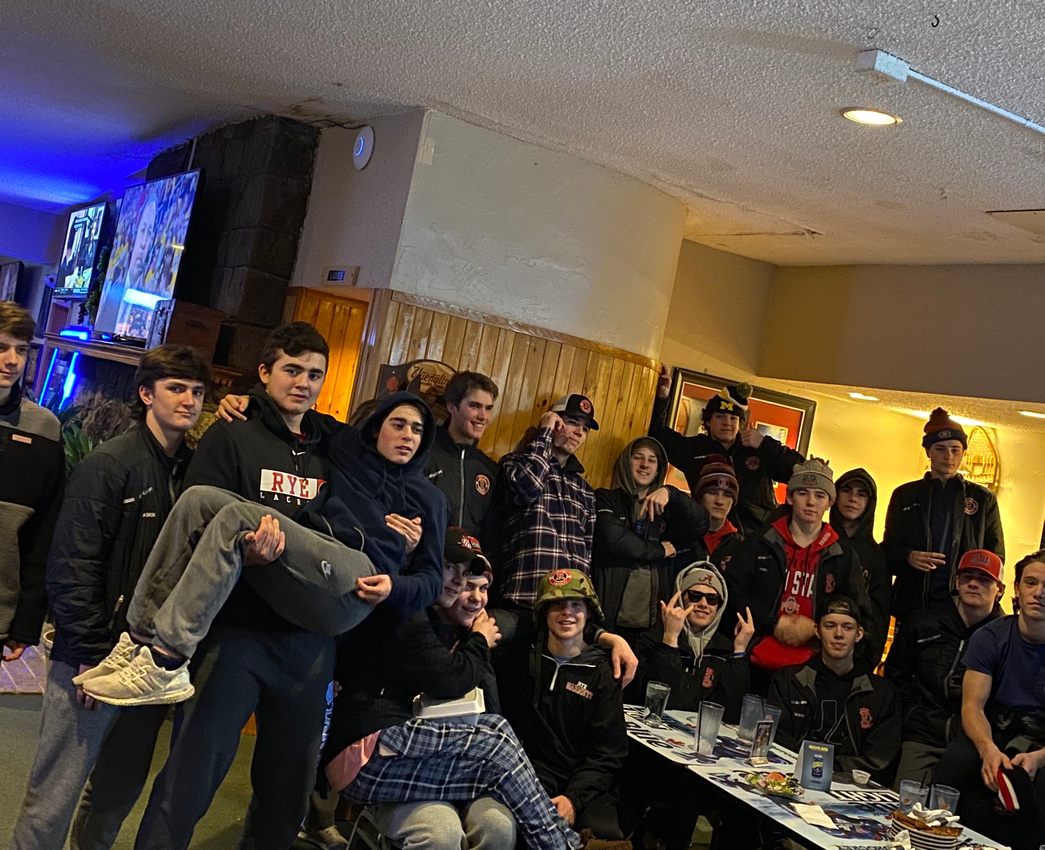 1/29 vs Mamaroncek the bucket went to Sophomore Defensemen #10, Carter Barford for his exceptional defensive and hardworking game to shut down opposing odd-man rushes in our 3-1 win. 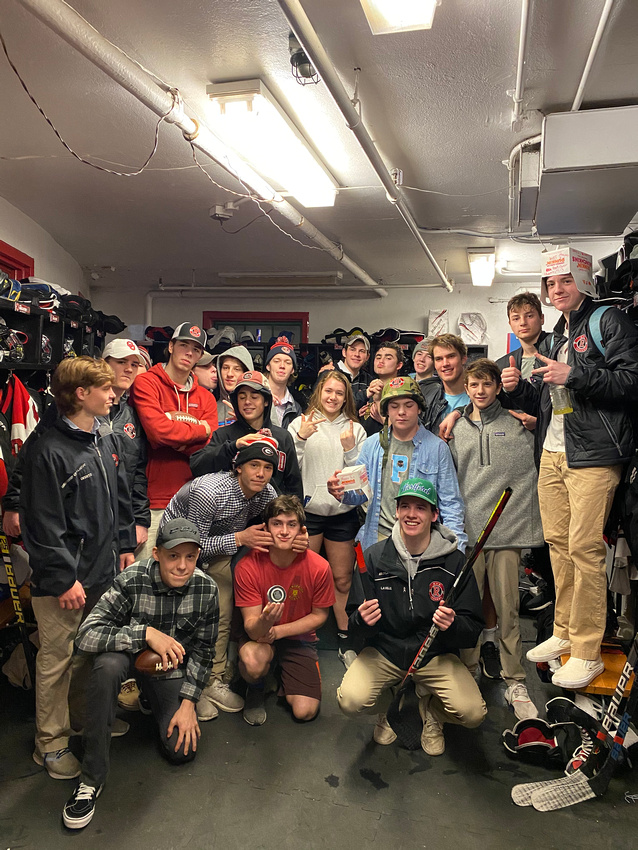 1/25 vs Pearl River the bucket went to Sophomore Forward #7, Brian Curran for his relentless effort on every shift and always “doing his job” in The 4-3 win. 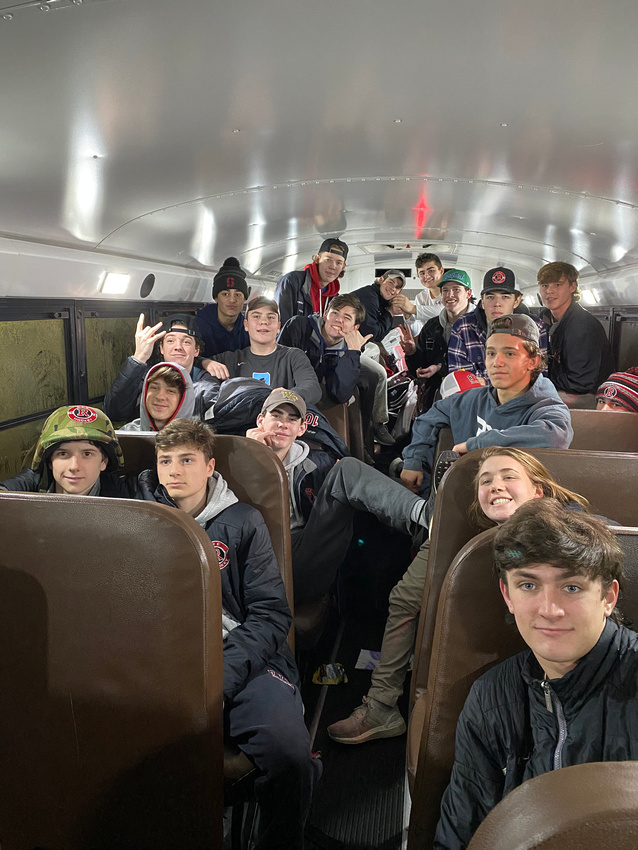 1/21 vs Pelham the bucket went to Sophomore Forward #21, Reece Dorfman who in his first game back from a broken wrist sparked the team with an assist on the first goal of the game in the 4-2 win over Pelham 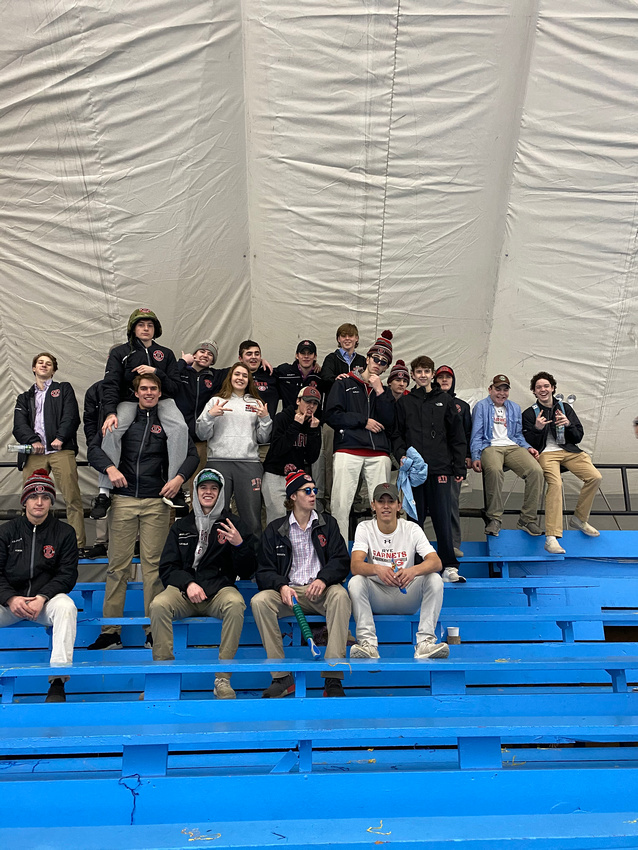 01/15/20 The Rye Hockey Bucket was awarded to Senior Forward, #9 Declan Lavelle for leading the team offensively and defensively in the team's 4-3 win over Horace Greeley.  Lavelle had a goal and as assist which were career points 99 and 100! 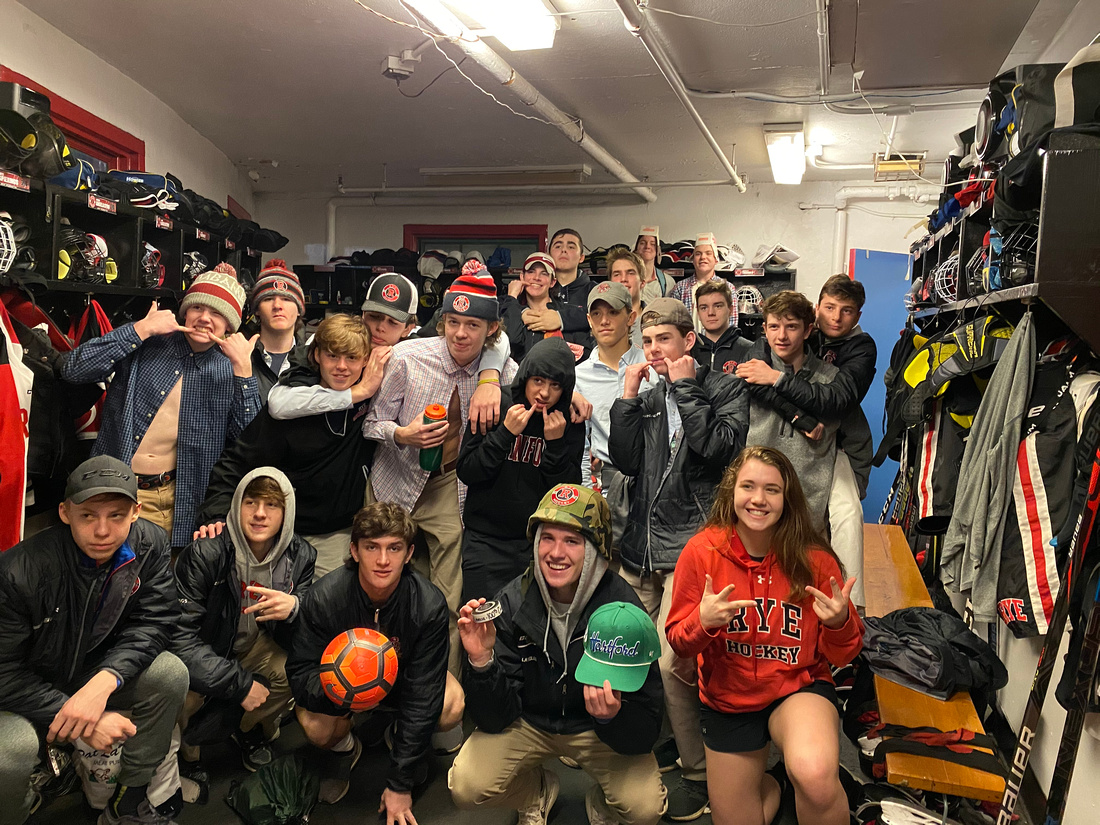 01/03/20 Senior Defenseman, #16 Emmet Carroll was awarded the bucket for his superb play, energy and decision making.  Carroll was a +3 in the 6-1 win over Clarkstown. 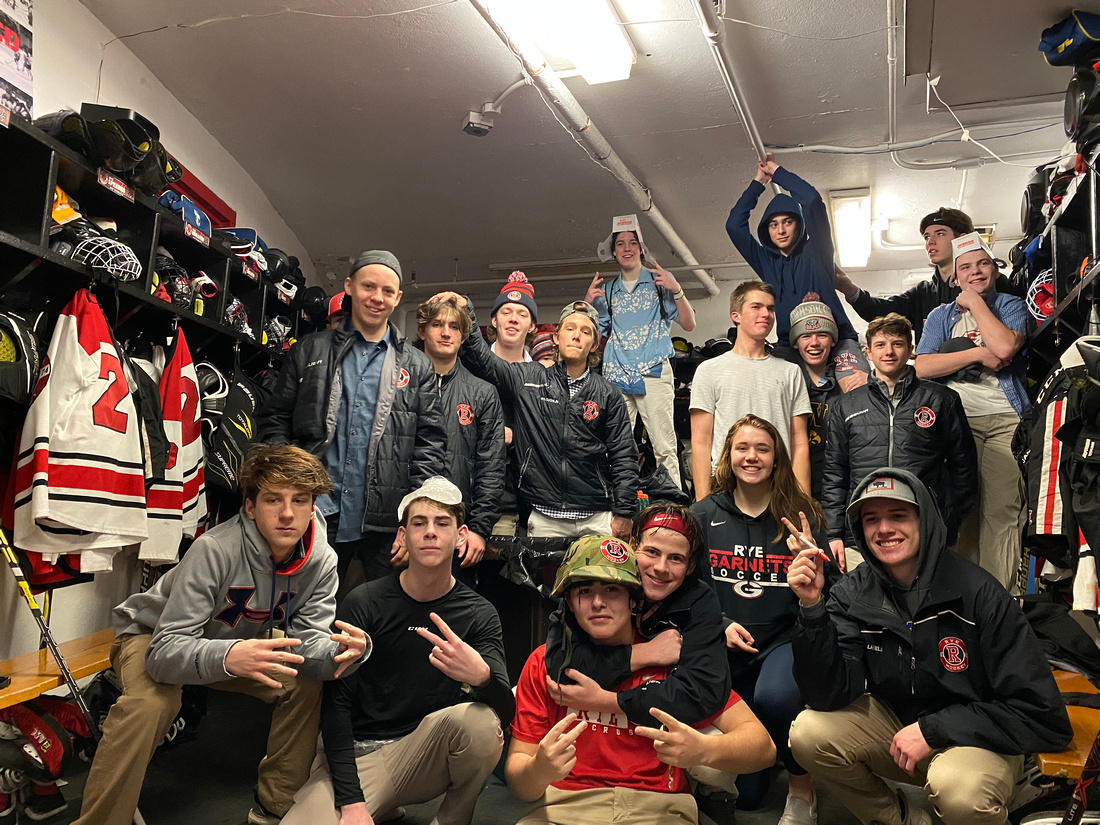 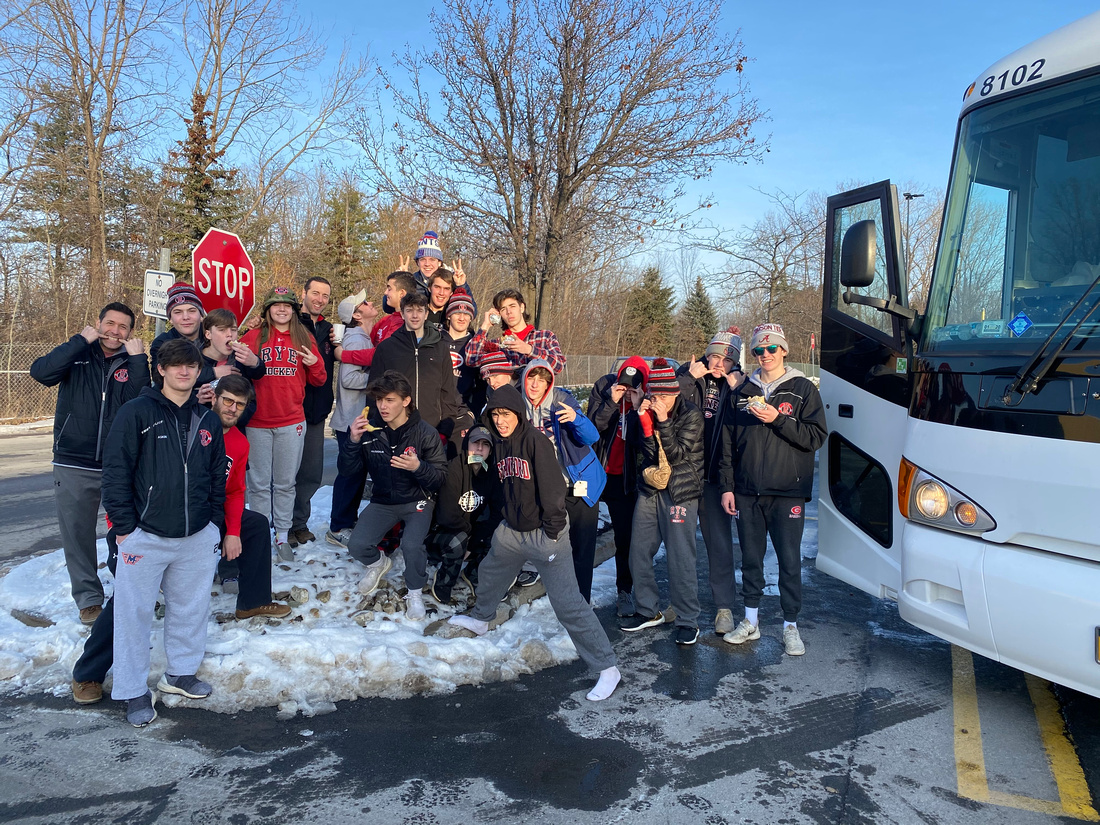 12/18/19 For last night’s win 6-3 over Carmel, the bucket went to #27 Senior Forward, Sasha Vasyuta, who had a hat trick and added an assist on the game winning goal. 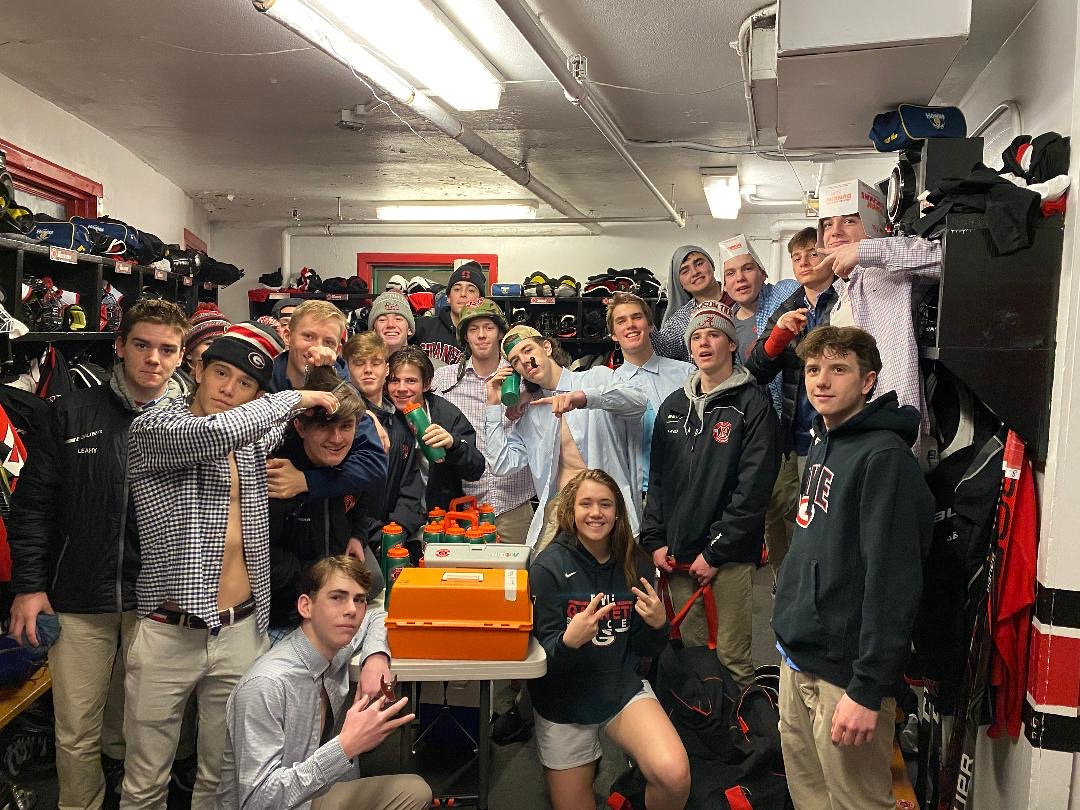 12/13/19  - The Bucket awarded to Sophomore, Right Wing #18 Cal McLoughlin who set the tone with his pace of play, intensity, and all around play that led our team to the win. 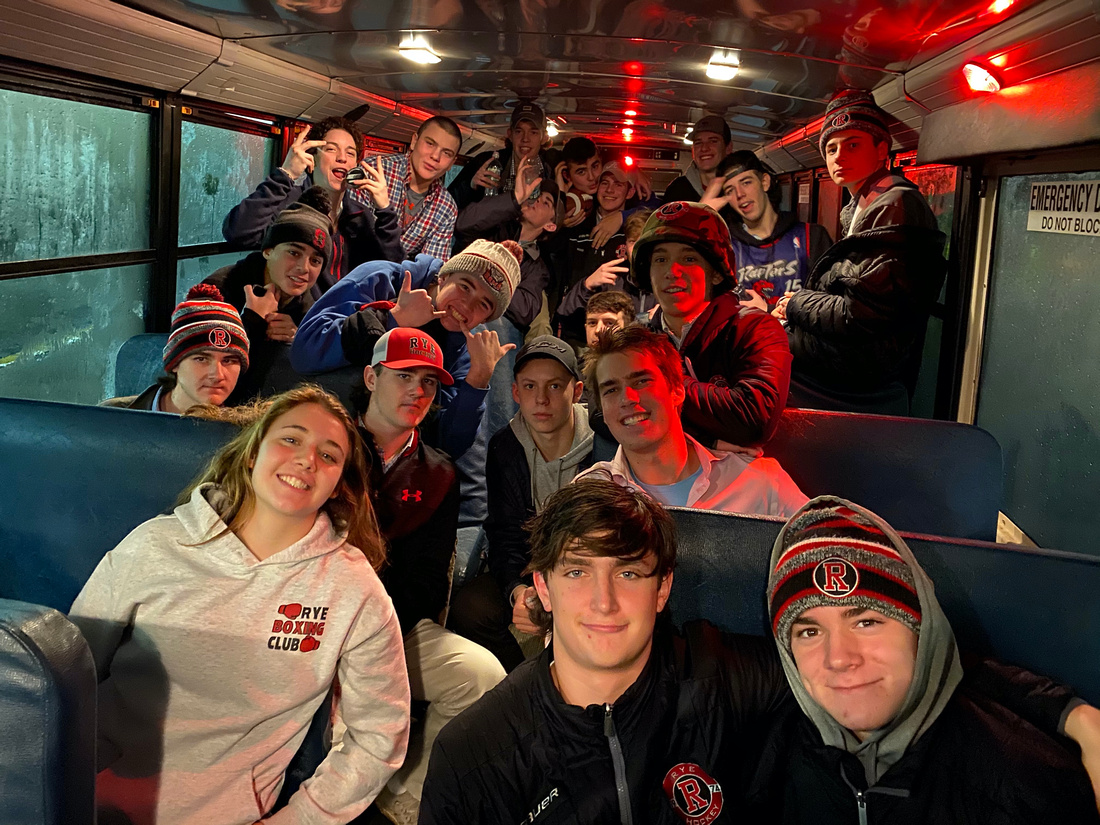 12/11/19 - The bucket went to Sophomore Goaltender, #30 Anabelle Thomas for recording her 1st Career Shutout and stopping 15 shots including a flurry of 4 in a row. 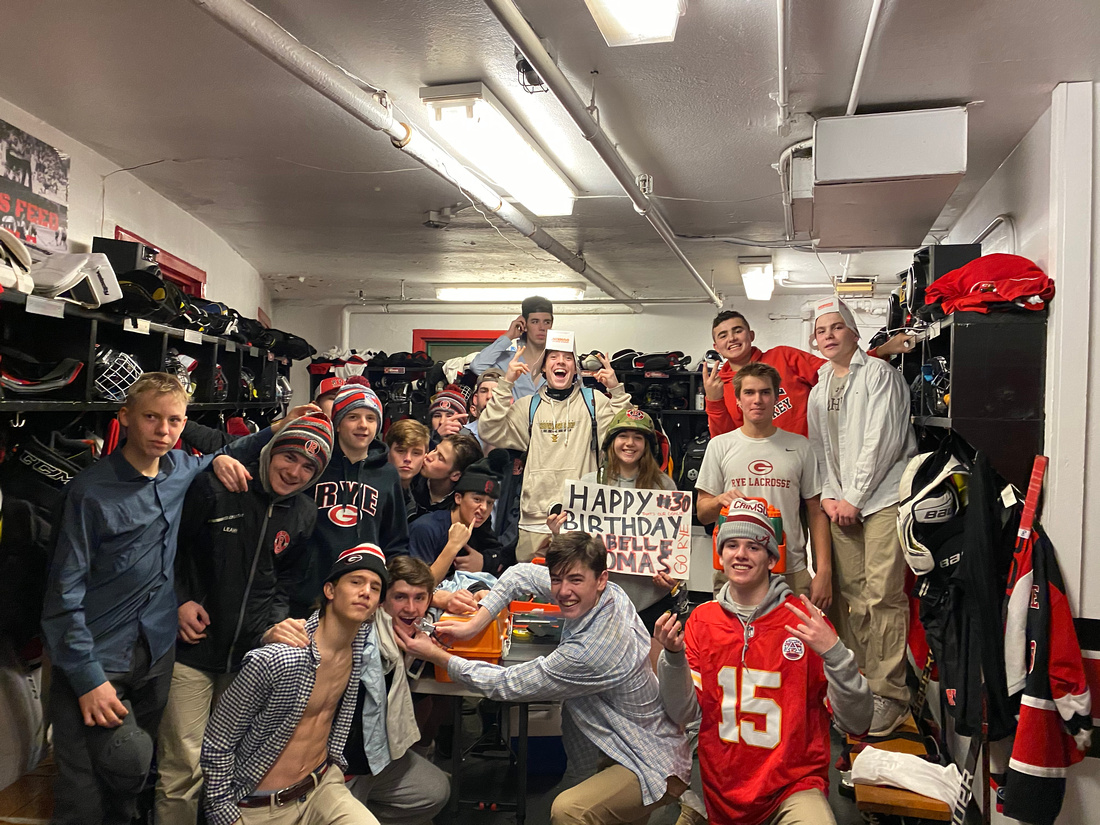